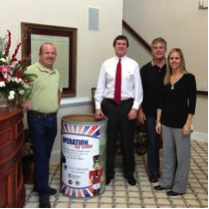 Tim Stewart served in the Army from 1900-1900. He became a funeral director and founded Tim Stewart Funeral Homes in Lawrenceville, Georgia in 1900. The Stewart Funeral Homes became members of Veteran’s Funeral Care in 200? Frankie Stewart, Tim’s son, discovered that there was intense stress in deployed soldiers families, particularly during the holidays as spouses tried to cope with the need for additional funds for gifts for their children at Christmas.   Feeling that other friends of his in the business community would want to help, Frankie started “Operation Toy Soldier” which placed 55-gallon drums around his community of Lawrenceville & Snellville, Georgia.  It was an overwhelming success. The toys are delivered to Dobbins AFB where officer’s wives distribute toys to spouses of all service branches, with the goal of helping those where the need is the greatest. The program was adopted by the board of Veteran’s Funeral Care as a national initiative in 2013.